So I’ve been playing with different colour correction techniques for my LED’s.

So here’s a simple one. Square it. Well ok, square it then divide through by the upper value (square and scale.) So:
unsigned int value = (i*i)/255;

The next I’m trying is something called Quadratic interpolation using a Lagrange Polynomial. BIG words for a curve of best fit. It works by generating a polynomial through a number of pre determined points. I have worked it out using 1->1, 255->255, and then 128->c. I can then change c, effectively changing the correction to the colour. Only problem is that it gets a little complex. So the maths formula is;

I attempted and failed to implement this as Arduino isn’t really the right platform for doing this kind of arithmetic. It works in excel ‘tho and produces a lovely graph. 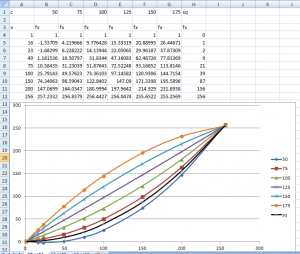 The Black curve in the graph is actually the square and scale method above. The other are for various choices of c.

So I quickly mapped the first 32 values i->x to the 32 LEDs I have and they are quite linear, from there on I found every bank to be quite similar. Which led me to the conclusion that for small values a one to one correspondence was ideal, then a kind of s curve would be ideal. I tried a few cubics but they were quite complex to implement and even tried a quartic.

So back to a basic square and scale I think for now.