So just turned my server on to play with Hyper V stuffage, and hummmm…. it wont pass POST. It beeps telling me there’s a RAID failure, but then dies before showing me the diagnostics page that it would normally show… HuMmM!

SO, pop the hood, thinking maybe it’s a RAM failure and I knocked a CPU heat sink… which then fell off. Think I’ve found the problem then.

Oh, and then I’ve run into this again…. 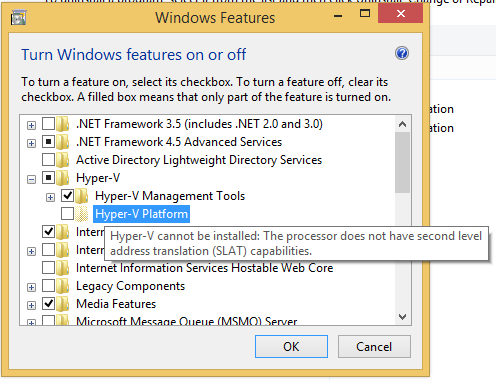 Time to break out Server 2012 DC edition again….Which also doesn’t like the server, time to break out the server 2008 disk, which supports SLAT, but didn’t require it. Might have better luck with it. Only problem there is that Server 2008 doesn’t support live migration and replication in the way that 2012 does :/.

*As a heads up for anyone wanting to play around – save some time and do some research on your processor. It needs to be 64bit, support Intel VT-x and Intel VT-x with Extended Page Tables (EPT). The best place to find this information is in the Intel ARK if you are using Intel proc’s. Have a look at my proc’s here. *