So For many years i’ve had an old RM server sitting under my bench, powered off, gathering dust inside and out. But no more – it’s time for it to either do something or be recycled. So, as a classic hoarder, i’m going to up cycle it rather than let a really good case go to waste. 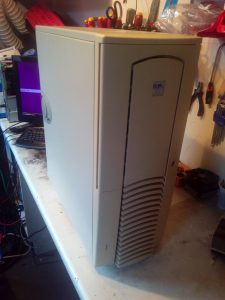 So the case is a “RM systembase TX” by Research Machines, which is actually a “Antec SX1040BII Performance Series II SOHO File Server” that’s been rebadged. Originally the spec would have been something like single or dual processors, sub 1GHz, but I can tell you that the RAM was PC6700, all 256MB of it (RM used to include that on the sticker on the back, that remains today). That also would have been top spec at the time. I vaguely remember there also being a a PCI SCSI card for the 18GB hard drives and the tape drive. The case actually supports EATX motherboards, and had 2*3bay removable hard drive caddies (one slot used by mandatory floppy disk drive – LOL), as well as 4*5+1/4in drives, it has (remaining) 3 case fans too.

But, in the past i had already “upgraded” the system. So out with that rubbish… I removed;

and i had replaced the PSU to something nice too (500w OCTIGEN jobby). 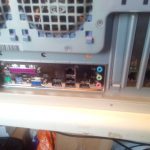 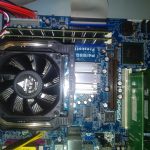 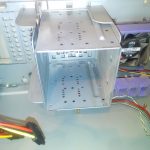 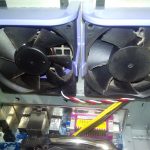 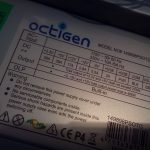 Awesome – so i start some CPU folding using my .deb package from a few posts ago and then i also install lm-sensors by;

Which gives me readings of 29deg for the GPU and 55/56 for the two CPU cores. 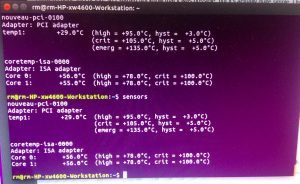 So now to install the correct graphics drives and try again with GPU folding. (367.57 driver which now seems to just work from the off, or maybe i just didn’t configure it correctly last time??? probably.) After a restart the sensors command also returns more than just the CPU temps, but now the graphics is missing…. typical. so here’s the sensors data with the VNIDIA X Server Settings showing the temps.

the graphics and sensors data

Right, best leave this for a while to make sure that the CPU heatsink is installed and dissipating correctly then i’ll start the good work on the machine. Time for dinner!